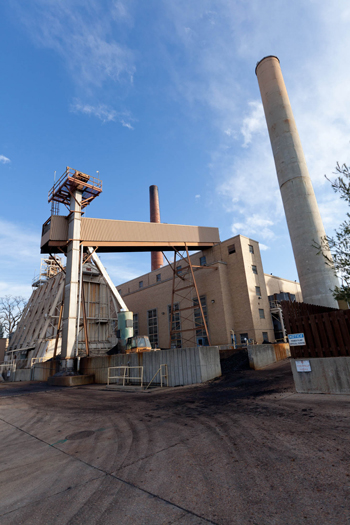 In 2010, University personnel partnered with the consulting team of McClure Engineering and CM Engineering to study feasibility of replacing the old steam infrastructure with a ground-source heating system, and to determine the impact such a system would have on campus.  The study assessed placement for well fields and corresponding underground loops along with current building system conditions and how best to implement such a dramatic change without causing severe disruption to campus life.

The Missouri University of Science and Technology designed an integrated ground-source energy system, a project that created three new geothermal heat-exchanging plants to serve the heating and cooling needs for over 1,000,000 square feet of conditioned space within 17 buildings.  These buildings encompassed classrooms, laboratories and offices.  Other spaces served solely by the geothermal cooling system include additional classrooms, laboratories, apartments/dorms and a student center.

In addition to the three main geothermal plants,  an additional system was created in the Gale Bullman Multi Purpose building/Student Recreational Center.  This system included 144 vertical bore wells drilled to the same range of depth as the primary well fields, and augments the center's HVAC and pool-heating systems.

The geothermal system uses the Earth's thermal mass to store rejected heat during the warmer months and extract it during the cooler months via underground hydronic loops.  This project eliminated the deferred maintenance of the 40 year old coal/wood chip-fired steam boilers, associated subterranean steam and condensate lines, and other related equipment in the power plant.  Additionally, a two-pipe chilled water system, sized for future expansion, replaced the aging single-pipe chilled water loop.

The buildings utilizing the steam plant and single-pipe chilled water loop had a carbon footprint of 99.6 million lbs of carbon dioxide each year.  Implementing the geothermal campus system was anticipated to decrease this footprint by up to 50%, bringing the University much closer to its goal of carbon neutrality.  The system was also projected to save 10 million gallons of water each year.

The geothermal system was anticipated to cut total energy use of the education & general campus buildings in half and save $1.1 million per year in operational costs for a 27 year payback.  The project also modernized campus infrastructure by incorporating over $15 million in deferred maintenance.  An additional $46 million of deferred maintenance tasks were rendered obsolete by the project and subsequently eliminated from the budget.  The system has been in operation since July 1, 2014.  Utility bills have shown energy savings of approximately 57% compared to recent years and roughly $100,000 saved in water costs.

Read more about this project in the McClure Paper .